This was such a sad chapter. I remember the OKT3 and how down you were but man I didn't know you felt this down. 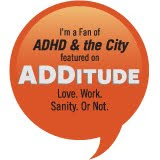 I am an ADD advocate!